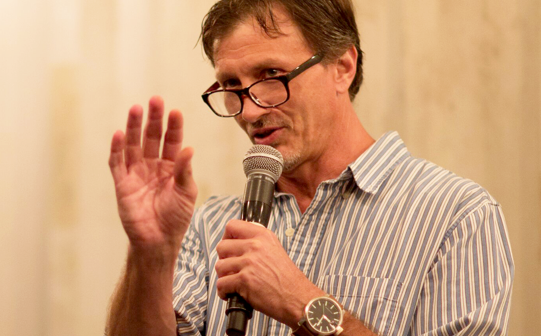 Looking back, Michael admits that he was “more addicted to the people” in his life than any drug.

Michael’s father abandoned his mother before he was born. Uncertain she could care for him, she left a newborn Michael in the care of her parents. Unfortunately, Michael’s grandparents passed away when he was a teenager, leaving him alone in the world and further compounding his trauma.

By the time he married his high school sweetheart, Michael had already begun drinking, eventually using marijuana, stimulants, and opioids. Now 52, he has six children and seven grandchildren.

A couple of years ago, Michael was heading to Florida for a bartending job. For no apparent reason, he got off the bus in Louisville and for three days walked around “sleepless and hopeless.” Michael confesses he very nearly took his own life. We praise God for leading Michael instead to Re:Center Ministries, where he entered the LifeChange Program in July 2016.

Michael’s passion for learning – which had previously spurred him to attend graduate school for business – was evident at Re:Center. Michael was raised Catholic, but began carefully studying the Bible upon entering the LifeChange Program. His desire to know God intimately quickly led to making a profession of faith as a believer.

Michael worked incredibly hard during the Recovery phase and was the first person to join the Transition phase when it first launched. He graduated from the LifeChange Program in March 2018.

Once hopeless and addicted, Michael now works full time at a packaging facility and is an active member of a local church. He’s also reconnecting with his family, including his first-born son who is serving a life sentence in prison, and the grandchildren he had never met. The relational brokenness in Michael’s life is slowly being healed. Praise God!

Michael’s story certainly isn’t over. He still battles fear and shame about his failures as a father and husband, but he now has hope for a better future. Michael dreams of one day going to seminary, becoming a counselor, and helping others experience the same freedom and redemption he encountered here at Re:Center.