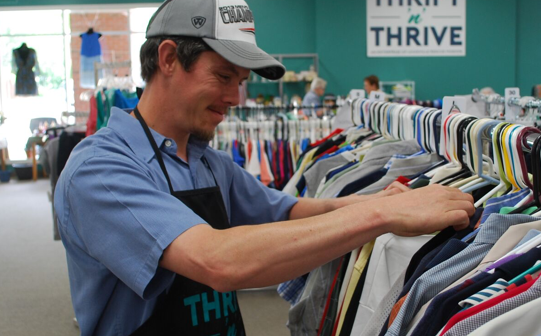 Until he got his life back, Terry admitted that he hadn’t looked toward the future since he was in the seventh grade.

Born and raised in Louisville, Terry experienced trauma and came from a broken family. His parents divorced when he was very young, and his mother died when he was 24. By the age of 12, he was already struggling with homelessness and drug abuse.

Now 33, Terry entered the program after his uncle — a pastor at a local church — told him about him the Mission. Terry had initially been hesitant to join the program because he couldn’t work during the first few months of treatment. He’d always thought that if he was working, he must be doing ok. Eventually, though, he could no longer hide his addiction from his son and friends so he entered the program in March 2017.

Actively homeless and living at Wayside Christian Mission, Terry knew there had to be more than “just surviving.” He was able to get clean a few times, but would quickly relapse because of depression, dwelling on his past and all the destruction around him — what he called “dead ends.”

Terry’s family didn’t raise him in the Christian faith, but he did attend a Christian middle school, and spent time with his grandmother, who was a believer.

The Mission gave Terry a chance to press pause on his life to figure things out, he says. By August 2017, he entered the Transition phase and successfully exited the program in January 2018. How now lives on his own, works full time at a hotel, and has a good and improving relationship with his teenage son.